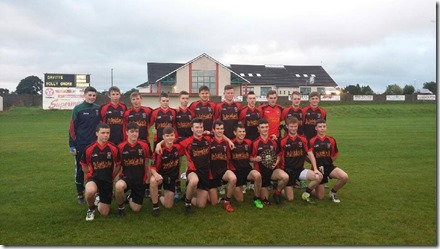 The large attendance at the Mayo Minor C League Final between Davitts and Hollymount Carramore in Ballindine on Friday evening, were treated to a thriller, with Davitts coming out on top by 4-8 to 3-6.

HollyCarra enjoyed plenty of early possession but Davitts displayed their intent with the opening score of the game, a cracking goal finished by Ryan McLoughlin, after a great move. This was the first of four superb first half goals from Davitts with Jack Ronayne grabbing two and John Kilkenny scoring the other one, to leave Davitts ahead by 4-4 to 2-3 at the break. Davitts first half points were scored by Evan Ronayne (3) and John Kilkenny.

HollyCarra, like Davitts in the first half, scored a brilliant early second half goal, to narrow the gap to four points. The visitors were enjoying a lot of possession but the Davitts defence stood firm with man of the match Dimitri Trench and Kieran Fahy superb and Thomas Corless, Jordan Flanagan, Aidan Macken and Kelan Cosgrove in uncompromising form in front of a confident Shane Cummins in goals.

Davitts were able to tag on points through Evan Ronayne (4), Jack Ronayne and Daniel Huane to keep the visitors at bay. Midfielders Niall Kearns and John Kilkenny worked extremely hard but the whole team displayed a tremendous work rate throughout the game. Jack Ronayne, Evan Ronayne, Ryan McLoughlin and Daniel Huane were excellent up front with Donal Kirrane also contributing when sprung from the bench.

Congratulations to the team and their mentors Lawrence Daly, David Ronayne and Liam Griffin.