The first St. Stephen’s Day Michael Mooney Jnr Memorial match between Ballindine and Irishtown was played on Sunday in Davitt Park. The fact that Ballindine edged the match to become the first holders  was of secondary importance.

The game was organised by the Davitts Senior footballers and management and drew a large crowd as current players and past masters combined to put on an exhibition of football in the memory of their former teammate and friend Michael Mooney, one of the most popular lads in the parish, who sadly passed away two years ago. All the proceeds from this event are going to Heart Children Ireland and they will benefit greatly from the most generous donations that were received. It also proved to be a most enjoyable event for everyone in these pretty difficult times.

Well over forty players togged out for each team with everyone getting game time and players could only play a maximum of two quarters over the hour. Garryowen McMahon refereed the game well with no major controversial decisions.

Irishtown got off to a great start with early points from Johnno Clarke and Josh Ronayne. Ronan McNamara and Cathal Corless pointed to level the game but a fine Josh Ronayne goal for Irishtown in the twelfth minute brought a tremendous roar from the Irishtown crowd. Ballindine’s response was swift with Shane Treacy netting from the penalty spot a minute later, after he was taken down in the square. Evan Ronane pointed to leave Irishtown ahead by a point after the first quarter.

Jack Devane pointed for Ballindine in the 16th minute and David McDonagh rolled back the years, blasting an unstoppable effort past a helpless David Mitchell to put Ballindine a goal up. Josh Ronayne and Maurice Prendergast shot Irishtown points but these were cancelled out by two points from Cathal Hennelly and John Lomu Kelly, Kelly’s classy point being warmly appreciated by the home crowd. That left Ballindine ahead by 2-5 to 1-5 at halftime.

The third quarter saw Ballindine really taking over with a lot of the Irishtown lads running out of steam rapidly. A Kieran Kilkenny goal from the penalty spot and three Fenton Kelly points put Ballindine nine points ahead going into the final quarter.

Another goal from Dowie in the 46th minute looked like Ballindine were sailing to victory but a Michael Hett goal and a points from Dara Vialli O Flaherty and Aidan McTigue narrowed the gap to seven points. A Niall Treacy goal for Ballindine extended the lead but two Michael Hett goals, to complete his hat trick, and a Seamus Roche point for a battling Irishtown team left Ballindine the five points winners of a very entertaining game.

Well done to all the lads that togged out, their management teams, to the organisers, the commentators, the photographers and videographers,  to everyone that turned up to witness the game and to everyone that donated so generously to such a worthy cause. After the game, Michael Mooney Snr presented the cup to Niall Treacy, the inspirational captain of the Ballindine team.

We all look forward to next years renewal….. 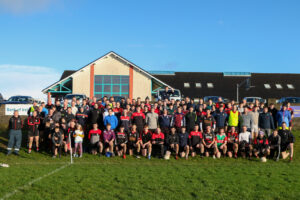 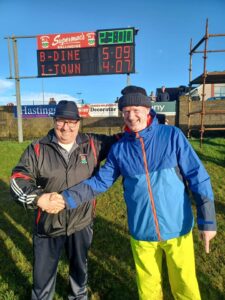 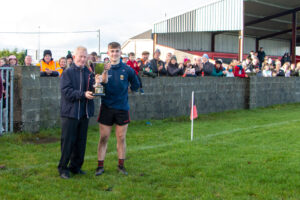 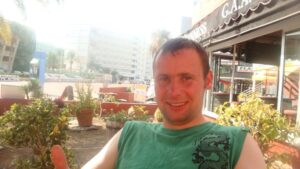