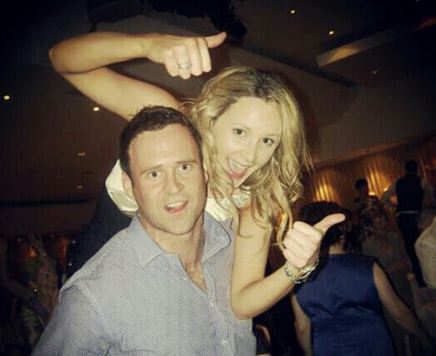 Welcome to our first preview of the couples that will be competing for the coveted title of ‘Davitts Mr. & Mrs’!

And what better way to kick off the introductions than with last year’s Senior Team Captain, “Romantic” Ronan Mac and his girlfriend, “Scintillating” Sarah Broderick.

Shy, timid and private are just some of the words that would be completely unsuitable to describe this couple. Ronan, a member of An Garda Síochána based in Co. Sligo, has been a stalwart of the Davitts midfield for the last decade. One of the most popular players in the club, Ronan is CELLdom found lacking in the art of conversation.

Sarah is a native of Balla, but is in the process of being converted to a Davitts woman! A Secondary School teacher, we’re not exactly sure what subjects Sarah specialises in, but let’s assume she would be well capable of giving lessons in…PE?

When asked what they thought of their chances of winning the Mr. & Mrs. competition, Ronan said – “I wouldn’t have entered this competition if I didn’t think we would win”. Sarah said – “I will do my best to help Ronan win because I know winning this title is one of his life ambitions. He’s a passionate Davitts man, and we will be working hard in the coming weeks to ensure we do win the Mr. and Mrs. title…”