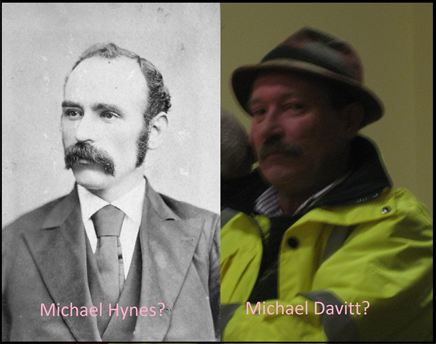 It has come to the attention of the Davitts GAA Club committee that a high profile, and somewhat controversial clubman bears an uncanny resemblance to the man this club has derived it’s proud name from. One could be forgiven for thinking that the current groundskeeper of Davitts is a direct descendent of one of Ireland’s most patriotic sons. From the sporting of moustaches to receding hairlines, these men are like two peas in a pod. And the similarities are not limited to the handlebar lip ticklers. The word ‘League’ springs to mind, for instance. One man founded the Land League in 1878, an historic day for Irish farmers, whilst the other man has almost caused the abandonment of various League games down through the years due to some highly questionable umpiring decisions. Davitt lost his right arm in a cotton mill accident at the tender age of 11. Even in something as extreme as the loss of a limb, similarities can be drawn between the two men – the term “legless” has, on occasion, been used to describe our stalwart groundskeeper after a long stint in Clarke’s Bar & Lounge. Truly remarkable, wouldn’t you agree…?