Heartbreak for U-21’s in County Final 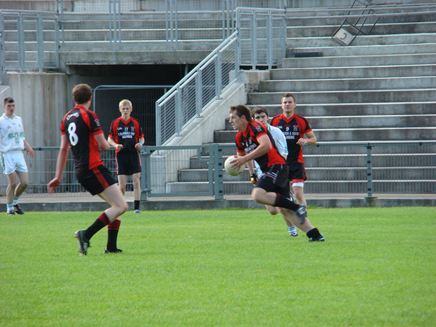 Davitts and Ballaghaderreen played a thrilling County U-21 B final in McHale Park, Castlebar on Saturday, with Ballaghaderreen coming out on top by 1-14 to 2-10. Fair play to an excellent Ballaghaderreen side but Davitts are extremely disappointed with the performance of the referee. Davitts were leading by two points with the game in injury time. When asked how much time was left, he informed Davitts players that the next phase of play would be the last. Davitts went down the field and scored a point by the excellent Liam Kearns to go 2-10 to 0-13 ahead and thought the game was won. However, the referee decided that there was time for another two minutes of stoppage time. Ballaghaderreen, to their credit, availed of this by scoring a goal to level matters, and then to score the winner, with the last kick of the game, to snatch an incredible victory.

While Davitts will rightly be bitter towards the referee, they will also admit that their first half performance, with the assistance of the strong wind, was just not good enough, going in level at 0-5 apiece at the break, and looking in serious trouble.

Davitts cause was not helped by a nasty hand injury to star defender Jonathon Clarke who had to retire after 15 minutes. Davitts, playing second fiddle to a very impressive looking Ballaghaderreen side, finished the half strongly and were on the ascendancy when the ref blew for half time, after playing only a minute of added on time.

Davitts showed their true colours in the second half, overwhelming the opposition and playing superbly against the wind and appeared to have the game sown up when leading by five points with eight minutes of normal time remaining. Josh Ronayne and Darren Connolly had scored the two goals which had looked like earning Davitts the title. Ballaghaderreen, to their credit, kept battling away and got their reward with those late scores and will rightly be delighted but also know that they were extremely fortunate to win.

Davits had star players all over the field and it would be unfair to single out any individuals as every player played their hearts out in what was a hugely encouraging second half performance, as good a half as anyone has ever witnessed from a Davitts team.