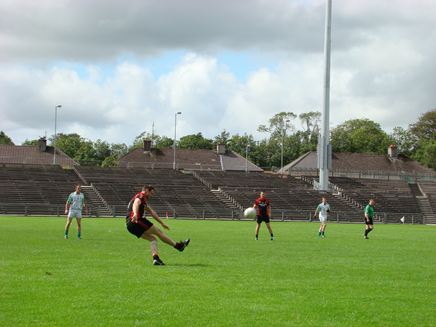 Davitts qualified for the Intermediate Championship semi-final after grinding out a win over Kilmaine in Hollymount on Saturday evening. Kilmaine started off well against a very nervous looking Davitts side and they led by 0-4 to 0-1 after fifteen minutes. Points by Michael Conroy, Pat Coyne, Aidan McTigue and Ronan McNamara had Davitts level at half-time, 0-5 each, although most of the large attendance thought that Davitts were leading by a point but referee Declan Corcoran had bizarrely overruled one of his umpires after Aidan McTigue had fired over an excellent score.

The second half started off well for Davitts with the imperious Ronan McNamara and Pat Coyne dominating the midfield exchanges and they raced into a two point lead before Kilmaine were handed a lifeline when Corcoran awarded them a penalty, a harsh decision in the eyes of the neutral spectators, which Joey Maloney despatched, to give Kilmaine the lead again. Davitts completely dominated the rest of the game and were full value for their 0-13 to 1-7 victory. A feature of the game was the superb long range freetaking of Ronan McNamara (pictured) who scored five monster kicks.