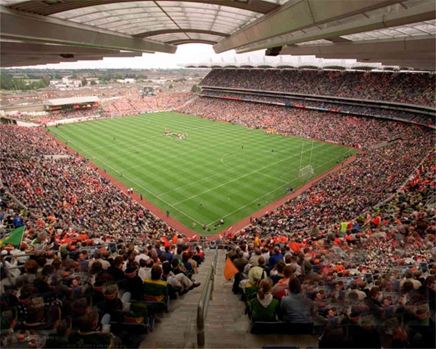 Davitts produced a clinical display in the All-Ireland Intermediate semi-final against a very young and brave Eire Óg side, to qualify for the All-Ireland final against the Kerry champions Milltown-Castlemaine on Feb 12th in Croke Park. Davitts, playing with the assistance of the stiff wind, were quickly into their stride with captain Michael Conroy leading the charge, and raced into a 1-8 to 0-2 lead at the break, with Conroy helping himself to 7 superb points and the equally impressive Fergal McGrath scoring 1-1, the goal coming in the 22nd minute after excellent work by Colm Boyle and Conroy.

Eire Og tried hard to come back into the game in the second half but a superb David McDonagh goal after 15 minutes killed the game off as a contest. The huge Davitts crowd in O Connor Park, Tullamore were able to relax in the final quarter of the game, as the game petered out to its inevitable conclusion.

This was a game where everything went according to plan for Davitts. Mark Diskin was confident and assured in goals and marshalled his defence well. The fullbackline of Kevin Diego Gallagher, the ageless Alan Roche and man of the match contender Colm Roche were superb throughout. Colm Boyle was outstanding at centre half back as were wing backs Johnno Clarke and James Cummins. Ronan McNamara and Paul Carey bossed midfield and Eire Og couldn’t cope with their direct no nonsence approach.

Wing forwards Pat Coyne and Keith Prendergast had arguably their best games ever in the red and black jerseys, while David McDonagh was an excellent leader of the attack, Aidan McTigue worked himself to a standstill in the corner while Fergal McGrath and Michael Conroy stole the show with their clinical finishing.

Peter Warren will know that Davitts will be facing much stiffer opposition in the final but the dream is still very much alive as the club awaits the greatest occasion in its history.

P.S. The interest that the team’s success on the road to Croker was even more apparent on Sunday evening and night, as the website server crashed due to extremely high volume of visitors to the site, so apologies for anyone who was left ‘in the dark’ regarding the result. We promise that this blackout wasn’t alcohol related. Neither was the blackout to demonstrate our solidarity with some smaller website based groups (Google & Wikipedia) that are protesting against the proposed internet censorship bill that is being drafted by the U.S. Government!

P.S.S. Photos from the match will be available in the Gallery shortly…