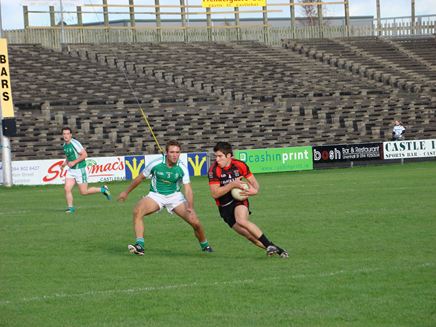 Davitts overcame the stern challenge of Leitrim champions Melvin Gaels to qualify for the Connaught Intermediate final, after an absolutely thrilling hour of football in Carrick On Shannon on Sunday. Davitts started off in whirlwind fashion with the full forward line of Aidan McTigue, Fergal McGrath and Michael Conroy terrorising the Melvin Gaels defence and had built up a 1-9 to 0-5 lead at halftime, a lead that would have been much more but for the poor display of the referee, whose performance was very disappointing for a game of this importance. The Davitts goal came after a sloppy clearance was picked up by Fergal McGrath who transferred the ball to Keith Prendergast and he passed the ball smartly to the outstanding Michael Conroy who made no mistake with an emphatic finish, to the delight of the huge Davitts support.

Melvin Gaels, as they normally do, came back strongly in the second half and had the excellent Davitts defence under enormous pressure for most of that second period, but the Davitts lads stood up manfully to all that was thrown at them. Gaels had narrowed the gap to two points twice in the closing stages but Davitts captain and star player Michael Conroy showed his undoubted class with two late points to ensure a Connaught final encounter with the Roscommon champions Padraig Pearses, in Kiltoom on Saturday (5th Nov) at 2pm.

Mark Diskin had an assured game in goals behind a very impressive full back line of Colm Roche, Frankie Barrett and Kevin “Diego” Gallagher. Centre back Colm Boyle blotted out the threat of Gaels star forward Emlyn Mulligan, and got great support from wingmen Johnno Clarke and the very impressive James Cummins. Ronan McNamara and Paul Carey got through a tremendous amount of work at midfield as did the half forward line of Keith Prendergast, Dave McDonagh and Pat Coyne. However, the full forward line triumvirate of Aidan McTigue, man of the match Fergal McGrath (pictured) and Michael Conroy were the Davitts leading lights on this historic day for the club. Substitutes Liam Kearns, Alan Roche, Carlos O Gara, Josh Ronayne and Martin Cosgrove all played their part in a superb game of football.