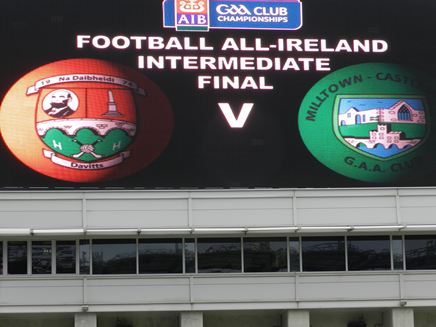 Mayo and Connaught Intermediate Champions Davitts glorious season ended in disappointment in Croke Park on Sunday, coming up short against a very impressive Milltown Castlemaine team, the Kerry and Munster champions in the All Ireland Intermediate Final.

Championship victories over Kiltimagh, Hollymount-Carramore, Killala, Kilmaine, Parke, Burrishoole, Melvin Gaels, Padraig Pearses and Eire Og had made the 2011 season the greatest ever in our club’s history. The securing of the O Mara Cup, the Michael Walsh Cup and the Mayo and Connaught Intermediate titles, as well as the promotion to Division 1A of the senior league, was furthest from the players, management and supporters thoughts for some time after this match but we have to acknowledge the absolutely incredible season we have just had. To see the red and black of Davitts run on to Croke Parke to play in an All Ireland Club Final is a sight few of us ever believed we would see, and is something that filled our hearts with such joy and we thank our wonderful lads and management from the bottom of our hearts!

While everyone from Irishtown and Ballindine were hurting on Sunday night, we all can be very proud of our incredible achievements which really have put the club on the national football map. Our supporters have been absolutely magnificent, our management superb and our players an absolute credit to the parish. To experience the All-Ireland build up, the banners, bunting, flags etc has lifted the whole community, have we ever had such a short winter?

The special supporters train? A massive thank you to the organisers. The Dinner Dance? One of the biggest the country has ever seen. The homecoming? While the players and management were heartbroken, we will never forget the fantastic reception that awaited us in Irishtown on Sunday night. Bourkes was just amazing, where else would you see such a crowd? Recession? Ya must be joking! Wasn’t it just amazing to meet people that travelled from all over the world to come home to support our fantastic team?

We also have to acknowledge the tremendous support we have got from our neighbouring clubs and indeed from all over Mayo and Galway. A special mention to our brilliant sponsors, just too numerous to mention individually here, but are highlighted elsewhere on this website.

The Kerry men got off to a brilliant start and led by six points after twenty minutes before Paul Carey’s long delivery was flicked on by Michael Conroy to Fergal McGrath who coolly finished to the net. This was as good as it got for Davitts who had suffered a severe blow to their chances before the game when the dynamic Aidan McTigue, one of our top players all season, was ruled out due to illness. Credit to all our players who never threw in the towel but it just was never going to be our day.

A big thank you to Mid West Radio (what a night we had in Irishtown on Friday), the Mayo News, Connaught Telegraph, Western People and the Tuam Herald for all their coverage of our epic journey.

While every member of the Davitts team and subs tried valiantly to turn the game around, it just never happened, we were beaten by a better team on the day, a team that produced an excellent display of football, and are worthy All-Ireland Champions. We would like to congratulate Clonbur on their victory in the Junior Final. Well done lads.

A new season begins on Sunday week, Feb 26th when we play the first round of the

O Mara Cup. We will compete in Division 1A of the Senior League and will be competing in Mayo Senior Championship.

Thank you Peter Warren, Ja Trench and John Treacy and your magnificent squad.